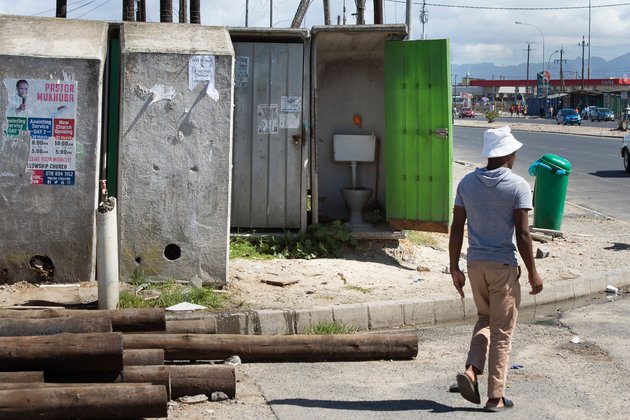 Many households in some of South Africa's biggest cities have been facing water restrictions in recent times - sometimes lasting for days at a time. People have had to make tough choices. For example, if you have a bottle of water in your house, are you going to drink it or use it for flushing the toilet? Sanitation scientist Dr Preyan Arumugam-Nanoolal argues that, even without water restrictions, it simply doesn't make sense to keep flushing drinkable water down the toilet. She and her colleagues have been evaluating alternative sanitation technologies. Ina Skosana had a conversation with her about this research and innovations surrounding it.

Around 65% of South Africa's population have access to waterborne sanitation such as flushing toilets connected to a sewer network, septic tank or conservancy tank. Another 19% have ventilated improved pit latrines, while 13% have pit toilets with no ventilation pipes. The remaining population either have pour flush toilets, chemical toilets or composting toilets, or they use buckets. Unfortunately, about 1% of the population still practise open defecation because they have no access to any sort of toilet facility.

South Africa is a water scarce country that has faced extreme weather events in recent years. For example in 2018 Cape Town faced severe drought and the possibility of running out of water. More recently, the east coast city of Durban was hit by floods which damaged bulk water and sanitation infrastructure. With the country's challenges around water management and availability, it's just not feasible and viable to continue with waterborne sanitation.

Conventional flushing toilets use around nine to 12 litres of water per flush. And that is potable water.

It seems practical for us to transition towards the adoption of non-sewered sanitation technologies.

What are non-sewered sanitation systems?

Instead of your waste going from your toilet via a sewer to a treatment works offsite, this technology treats your waste onsite and allows the treated outputs to be safely reused or disposed of.

These technologies can be installed in the household and larger systems can be implemented for schools or communities. They consist of a front end, which is your toilet facility, and a back end, which is the treatment facility.

Pictured here is one of the reinvented toilets funded by the Gates Foundation. The HTClean, developed for a single household, uses a vacuum flush evacuation mechanism thus. This reduces the water required to 0.2-0.9 litres per flush. The urine and faecal matter are mechanically separated at the back end and treated by high temperature and high pressure processing. The treated liquid output is reused for flushing.

What are the benefits of this toilet technology?

Non-sewered sanitation is less dependent on water. It uses conventional flush (less than 6 litres), pour flush, dry toilets or novel evacuation mechanisms that use mechanical forces with little to no water. And its treated output can be reused.

How close is this to being a reality in South Africa?

I am involved in the training and awareness around a global standard called ISO 30500, which has been adopted in South Africa as SANS 30500. This standard provides guidance for the design, performance and safety requirements of non-sewered sanitation systems. It also considers the sustainability of these systems over a functional life-span.

We at the University of KwaZulu-Natal, on behalf of the Water Research Commission, are coordinating the development of a certification scheme which will allow these technologies to be certified against the standard and enter the market.

Two technologies which were developed through the Reinvented Toilet Challenge funded by the Bill and Melinda Gates Foundation have been licensed by two South African companies to be manufactured in South Africa. These technologies are being tested in the field through the South African Sanitation Technology Enterprise Programme. The programme provides a platform for sanitation innovators and commercial partners to take their technologies from the prototype development phase to commercialisation.

The Department of Water and Sanitation has already identified the benefits of non-sewered sanitation and recently launched the Sanitation Technology Technical Coordinating Committee. The committee's function is to help develop a process to assess and validate appropriate sanitation technologies, get them certified and accredited, and guide their adoption and commercialisation. However, while the regulator can make recommendations, it's really the municipalities that make the decisions.

I believe that quality assurance through certification will provide users and water service authorities and municipalities with peace of mind that these technologies are safe and reliable. While the cost of developing, testing and certifying non-sewered sanitation technologies may appear high now, it all boils down to the economics of scale. Over time, a higher demand will make these systems cheaper to manufacture and affordable for households.