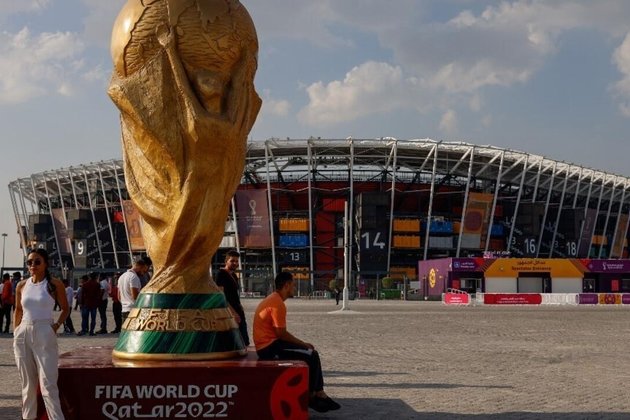 In his poem Die Lorelei, Heinrich Heine touched on the stillness of the Rhine in his portrait of the legendary mermaid who lured sailors to their doom on the rocks along the river. Just shy of 200 years after Heine's masterpiece, no siren songs have been required to attract footballers to the 2022 World Cup in Qatar.

Thirty-two squads of 26 players will be present and ready to parade their collective wonderfulness in front of local authorities, who are famous for their conservative approach to gay and transgender people, and renowned for their featherlight touch concerning the welfare of migrant workers in the country.

In siting the World Cup in the Middle East for the first time in its 92-year history, Fifa, which organises the event, has failed to enhance its reputation in the way that it did when South Africa hosted the show in 2010.

That fest - won by Spain - was the first time the World Cup had been held on the African continent.

Despite the crowds of naysayers and pessimists, Fifa emerged with some lustre for pursuing its drive to take the event into all regions.

Qatar - which is estimated to have spent around 200 billion euros on the 22nd edition of the World Cup - gushes with far more cash than South Africa.

But yet it has been hampered by bad vibes and enduring jibes that no amount of petrochemical money can quell.

Less than two weeks before the start of the tournament, Sepp Blatter, who was Fifa supremo when Qatar was selected, said the choice was a mistake.

In an interview with the Swiss newspaper Tages-Anzeiger, the 86-year-old said: "At the time we actually agreed in the executive committee that Russia should get the 2018 World Cup and the USA that of 2022.

"It would have been a gesture of peace if the two longstanding political opponents had hosted the World Cup one after another," he added.

Blatter, who was unceremoniously ditched as Fifa boss in October 2015 amid a welter of charges for corruption, was twisting the knife only five days before the hosts kicked off against Ecuador at the Al Bayt Stadium.

He said the issue of human rights in the country was not discussed during the sessions to pick a host.

Had the well-paid Fifa suits followed the gist of those behind-closed-doors powwows, they might have saved the organisation a huge amount of flak.

How many barrages to describe?

Start with the environmental conundrum. The World Cup will take place in November when Qatari temperatures are typically around 32 degrees Celsius. To offset this, the stadiums will be cooled to around 23 degrees using hi-tech fans.

In the glossy brochures for the jape, no mention was made of Russia launching a war on Ukraine and energy prices rising to such stratospheric heights that make the use of such spectacular cooling science appear distasteful.

The plight of migrant workers has little to do with geopolitics and land grabs.

It is a human rights issue and Fifa have obfuscated and dodged responsibility to tackle the Qatari authorities on it.

Fifa still has not officially backed a fund to compensate migrant workers and their families for injuries and deaths on construction sites in Qatar. And this despite support for the move from World Cup sponsors, several human rights campaign groups and former players.

"Please, let's now focus on the football," Fifa boss Gianni Infantino and secretary general Fatma Samoura wrote to the teams at the start of November.

"We know that football does not live in a vacuum and we are equally aware that there are many challenges and difficulties of a political nature around the world.

"But please do not allow football to be dragged into every ideological or political battle that exists."

The captains of several European teams plan to wear "One Love" multicoloured armbands during matches, in response to concerns about Qatar's anti-LGBTQ+ laws.

Meanwhile the US men's team have put up a rainbow-themed logo at their training facility in Qatar. The design features seven rainbow-coloured vertical stripes below "USA" in dark blue letters and is part of the "Be the Change" initiative the team adopted in 2020.

"When we are on the world stage and when we are in a venue like Qatar, it is important to bring awareness to these issues and that is what 'Be the Change' is about," US coach Gregg Berhalter said a week before his side's opening game against Wales at the Al Rayyan Stadium.

"It is not just at home that we want to bring attention to social issues, it is also abroad," Berhalter added.

"We recognise that Qatar has made strides and there has been a ton of progress but there's some work still to do."

Has Qatar succeeded in 'sportswashing' its global image?

Two years ago, rights campaigners welcomed government reforms that effectively ended the kafala - or sponsorship - system, under which workers were unable to change jobs without their employer's permission.

It was a system that led to exploitation and in some cases forced labour.

"For too long, laws that ban workers from changing jobs without their employer's permission, along with widespread low pay, have left migrant workers in Qatar at the mercy of abusive employers," said Steve Cockburn, Amnesty International's head of economic and social justice.

"The removal of restrictions on changing jobs should make it easier for workers to escape abuse. This is an encouraging sign that Qatar may finally be heading in the right direction."

The overarching criticism of Fifa's modus operandi is why it enters into hosting arrangements with governments who are likely to come under fire. And why do administrations want to dance so flamboyantly under the spotlight and yet not take steps to get their PR moves right?

It appears illogical for both parties in an era of interconnectedness and transparency. And increasingly no-win for the organisers, despite their touchy-feely phraseology.

"One of the great strengths of the world is indeed its very diversity," added Infantino and Samoura in their pre-tournament missive to the 32 teams.

"And if inclusion means anything, it means having respect for that diversity. No one people or culture or nation is 'better' than any other."

And besides, over the next month the 32 teams will be vying to prove that they are better than the one on the pitch in front of them.

Defending champions France enter the extravaganza attempting to become the first squad since Brazil in 1958 and 1962 to win successive tournaments.

However, the midfield has been shorn of N'Golo Kante and Paul Pogba - both so crucial in the 2018 surge to glory.

Croatia, the team the French thrashed four years ago, retain nine of the squad - including skipper Luka Modric - from the Russia adventure.

And Germany - humiliatingly dispatched after the group stages in Russia - will be keen to show they are back on the road to becoming a feared force in world football.

The usual suspects from South America - Brazil and Argentina, led by Paris Saint-Germain stars Neymar and Lionel Messi respectively - will be expected to feature in the rinse of the latter stages.

Messi, 35, will be attempting to add the ultimate bauble to an impressive trophy cabinet and to enter the realm reserved for one Diego Armando Maradona whose array of tricks took them to the title in 1986.

Neymar too enters the tournament questing for a grail. With 74 goals in 120 matches, the 30-year-old is within three goals of equalling Pele's record haul of 77.

Success could come in Qatar. Barring a horrific injury, it will arrive later. But in the annals, his feats will never eclipse those of the king.

Pele's 75th goal for his country opened the scoring in the World Cup final against Italy in 1970.

And two assists followed, one headed, for Jairzinho to make it 3-1 and then the exuberantly nonchalant pass for Carlos Alberto's screamer for 4-1.

Pele remains the only player to have won three World Cups: all lifted when tournaments seemed like the waters of the Rhine.