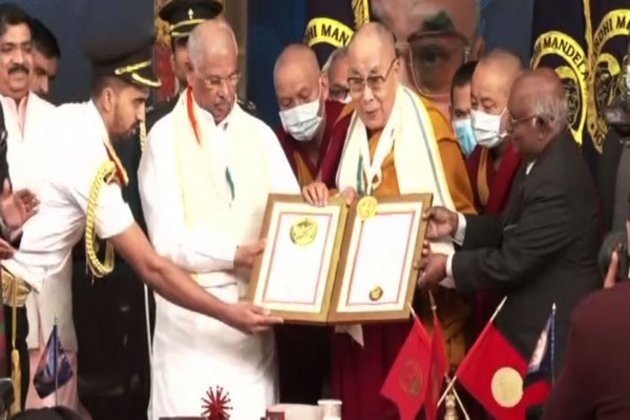 The religious leader was selected in 2020 but the award could not be given to him due to the Covid pandemic. Now with situation normalising, the award was presented to the Dalai Lama by the Governor of Himachal Pradesh.

Himachal Pradesh Governor Rajendra Vishwanath Arlekar, Dalai Lama, and former Chief Justice of India K G Balakrishnan were also present in the ceremony organized by the Gandhi Mandela Foundation at Mcleodganj. Governor Arlekar presented the award to the Dalai Lama at a function. During the function, the Dalai Lama thanked the Foundation for the award and expressed his best wishes. He also emphasized kindness, unity and non-violence in the world.

"We all are a happy seed of compassion because we are social animals. Right from the beginning, the mother gives us tremendous affection, karuna." He further added, "Karuna should be included."Talking about "karuna" or compassion, Dalai Lama said that it should be inner peace and inner strength. "If inner peace is there then you can utilise human intelligence more properly. But if you develop anger then you can not utilise human intelligence more properly so, peace of mind is very important," he added.

Meanwhile, Governor Arlekar said that it is a great honour for him to facilitate the Dalai lama.

"We all have gathered here for a very different function. It is not just a facilitation of Dalai lama but it is honouring the ethos of this great culture which has been flowing through this sand and soil and waters and air in this country for thousands and thousands of years," he said.

"It's an honourable privilege of his holiness that this particular presentation has to come to this foot. Nobody else can claim today in this world," he added. (ANI)